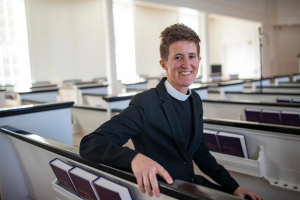 When they found out that my first Sunday in the pulpit here at Westminster would be Labor Day weekend, the associate pastor nominating committee took it upon themselves to give me a head’s-up and some reassurance.

“Just so you know,” they said, “there might not be many people in the sanctuary that day. Don’t take it personally! You see, there’s this thing here in Minnesota—a lot of people leave town for Labor Day—they go up north to their cabins.”

“Yes!” I said, “thank you. And don’t worry—I remember about the cabins—last time I was here it was Memorial Day!”

It might seem a little ironic to celebrate a day called “labor day” with a weekend full of recreation—by taking off from work, and in some cases getting out of town, in order to relax and enjoy ourselves. But actually, it’s kind of fitting.

Of the many achievements of the labor movement—fair wages, workplace safety, the right to unionize, etc., there was not just the protection of work, but also the preservation of leisure – the conditions of work, but also its limits—the weekend and the 8-hour day.

While these things now seem, to us, like a given—even if our workaholic and now work-from-home culture means that we rarely actually observe them—at the time they were introduced, these limits on work felt revolutionary.

Prior to the labor movement, leisure was for the leisure classes—     people with the time, money and resources for recreational pursuits–and work was for the working classes, whose life permitted little else but drudgery and toil. No, said the labor movement, a worker is more than a means of production. A worker is a human being, with human needs, including leisure — and this meant putting limits on time spent on the factory floor.

Last summer, Westminster’s adult education program was about the theology of play—an exploration of the ecological, scientific, and sociological aspects of play in human life and human flourishing.

I love this idea, and today in my sermon I’d like us to revisit it in honor of Labor Day, and also to mark the present moment of seasonal transition, away from summertime recreation and toward a focus on work and school.

My own favorite definition of play comes from the socio-biologist E.O. Wilson.

He got his start as a myrmecologist—a person who studies ants—and his major books is called “The Ants.” It’s this great big enormous tome—732 pages weighing in at 7.5 pounds. The price tag is pretty hefty, too–$140.

I don’t care enough about ants to invest that kind of money—but I skimmed through it one afternoon while browsing at the library, and I came across a definition:

“Play,” Wilson wrote, “is generally defined as an activity that makes no immediate contribution to survival or reproduction.”

Of course, that word “immediate” is an important qualifier, here. A lot of play does lead to adaptive advantages down the line, because a side effect of play is growth and learning: a tiger cub who wrestles with her littermates builds strength and learns to pounce. And yet play itself is entered into freely, without coercion or agenda, not for the sake of an outcome. From the perspective of the baby tiger, play isn’t for learning, it’s for fun. It’s diverting, engaging, absorbing—an end in and of itself.

And yet play, while spontaneous, isn’t entirely cost-free it requires conditions of security—the watchful presence of the parent so that it’s safe for cubs to focus on something other than survival and lose themselves in their own enjoyment. And because it comes with this cost, and produces no immediate benefit, not all species do it. As a bold, all-caps subheading in Wilson’s book declares, “Ants do not play.” But, as the leaders of the labor movement so forcefully insisted, people are not ants.

People, all people, need to play—and it’s worth making societal changes, even costly ones in order to make that possible.

the conditions that make play possible, the costs of play – the fact that our society is more willing to bear these costs for some children than for others—and the lifelong consequences of this, for individuals and for communities—we could, and probably should, talk about all these things.

But this is a sermon, and at some point I’ve got to get us back to scripture,     to that Gospel text that David read—that difficult and painful passage about the costs, not of play, but of discipleship.

And while Labor Day might be a fitting occasion for a light-hearted sermon about play, the lectionary passage decidedly is not:

“Whoever comes to me and does not hate father and mother, wife and children, brothers and sisters, yes, even life itself, cannot be my disciple,” Jesus says.

“Whoever does not carry the cross and follow me cannot be my disciple. None of you can become my disciple if you do not give up all of your possessions.”

Oof, right? There is NOTHING playful about this. This seems, instead, to be the epitome of seriousness—the promise of a life of drudgery and toil. What’s the connection to play?

It’s important, if we want to understand Jesus’ words in this passage, that we take a look at some context.

It comes right on the heels of the passage David preached on last week – the one about the table the invitation not just to the advantaged and the insider, but to the impoverished, the differently abled, those who can’t walk, and those who can’t see.

Jesus extends this incredible welcome to those who have long been excluded:

The people who hear this message respond, and great crowds form around him. It’s here that Jesus turns and says, in response to those who follow him, “the invitation is free, but the cost is high.” If you wish to become my disciple, Jesus tells them, it will completely transform your relationship to people and possessions; it will absorb you entirely; it will cost, and require, nothing short of your life.

Lose yourself, he says, if you want to follow me.

One thing to note about this verb “to hate”—“hate father and mother, wife and children, brothers and sisters, life itself” the Greek verb translated here as hate is not about an emotional state—Jesus doesn’t command his disciples to despise, dishonor, disregard their families. No, that verb hate in this context means something more like detach or turn away.

As Karl Barth puts it, “it’s not the persons themselves who are to be hated… [but] the hold which these persons have and by which they themselves are also gripped.”

In an ancient society where roles were even more rigidly drawn than ours are, determined by birth and class and position within the oikos, the household – Jesus tells his followers to hold these roles lightly, not to let them determine who you are.

OK so: what does this teaching about discipleship have to do with play?

Children do this with such great ability. They cease to be who they are—tiny, dependent humans and instead become the thing they’re playing at—astronaut, artist, parent, physician.

And they can do this almost effortlessly – anytime, anywhere, with anyone who happens to be around.

I’ve seen a six-month-old baby in the waiting room at the dermatologist decide that the game is going to be “smile and goo and gaa” and that everyone is going to play, and she looks around and soon enough the ENTIRE room of adults waiting for the dermatologist are smiling and babbling along. It’s incredible.

It’s harder, for adults than for kids, to enter into play like this, because our roles are much more rigid, our imaginations less nimble.

It’s hard to lose yourself in a game or craft or sport when your anxious, addled, adult mind is encumbered with unanswered emails and a recent disagreement with your sister-in-law and concerns about the furnace.

But that is precisely why play is so vital—because it helps to loosen the grip of our roles and relationships; to detach ourselves from our possessions; to imagine things another way.

Discipleship works the same way—as an imaginative entry into a world of story— the Gospel world of Jesus and his followers that helps us to forget ourselves and opens us instead to possibility, to spontaneity, to find new ways of loving God and neighbor.

One of my favorite books is by an NYU professor named James Carse; it’s called Finite and Infinite Games: A Vision of Life as Play and Possibility. The book begins:

“There are at least two kinds of games. One could be called finite, the other infinite. A finite game is played for purpose of winning, an infinite game for the purpose of continuing the play.”

Checkers, volleyball, croquet—those are all finite games. But this kind of finite play shows up in other arenas, too—in school, in work, in politics, in any system whose participants are ranked, whose prizes are external.

There is nothing inherently wrong with these arenas—but the problem arises when we let them define us – when GPA or job title becomes a person’s primary source of worth or value–and it has consequences not only for our souls, but also for our society, because we become so attached to our own, or our children’s, advancement that we lose the ability think playfully, improvisationally, about other ways of living and to entertain the possibility of making sacrifices so that others can do the same. And because of this tremendous pressure, no one is – or feels—free to live otherwise—to pause the treadmill, and step outside, and see who else is out there, in the street.

A game of pick-up, whose players aren’t listed on some pre-determined roster of those who made the cut, but come instead, like the ragtag band that followed Jesus, from the people you encounter, the ones you meet along the way.

A game of improvisation, whose rules aren’t fixed but fluid,  like the grammar of a language rather than the rules of a debate.

A scrimmage—whose purpose isn’t winning, but continuing the play, generously, for everyone, not just your own family, your own team.

This kind of living—this infinite play—this life of discipleship – it’s free to enter, by anyone, at any time—

but it’s not without its costs—it requires a loosening of the rigid roles we’ve been assigned, a lightness with respect to one’s relationships and possessions.

But there’s an immense benefit to this kind of infinite play, this ability to imagine another way of living—and the benefit is one of transformation.

A worker might become a union organizer, a stay at home parent an advocate, a lawyer a follower of Christ.

It’s an invitation to give up living as though the game is over when you die, and you’ll be ranked according to the social and material capital that you’ve accumulated—the number of people at your funeral, the net worth of your estate—but to live as though life will go on— life for yourself, life for others, life with God.