The Imagination of God 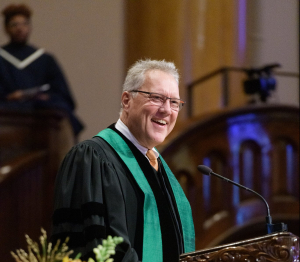 Gathered here on this beautiful Sunday morning, we have come together with anticipation and great joy. Something new is happening. The children have returned. The singing is strong. The light around us has grown.

We are drawn here today, compelled to find a faithful way together through these uncertain and harrowing times. With the pandemic receding but Covid still with us, with a nation convulsed by extremism and fear and a city traumatized by violence, with a world either on fire or under floodwaters, hope hangs in the balance. It’s time to start over.

The people of God were made for times like this. It’s as if we were present at the beginning, when the Creator “stepped out on space” – in the words of poet James Weldon Johnson –

“And far as the eye of God could see

Blacker than a hundred midnights

Down in a cypress swamp.

And the light broke,

And the darkness rolled up on one side,

And the light stood shining on the other,

There’s goodness in the interplay between night and day.

As the ancient Hebrews tell it, the creation is a product of God’s imagination. The Creator clearly enjoys what emerges as the world unfolds. With each step the Creator appears to be tinkering, and then assessing the result. It’s almost playful how it happens. Every day the divine imagination conjures up new ideas, each of which brings delight.

And the light that was left from making the sun

God gathered it up in a shining ball

And flung it against the darkness,

Spangling the night with the moon and stars…

And with a clapping of Almighty hands, the poet says,

“The waters above the earth came down…(and)

the lakes cuddled down in the hollows of the ground,

And the rivers ran down to the sea;

And the rainbow appeared.” (James Weldon Johnson, The Creation)

Then, out of God’s imagination, come creatures of every kind – beasts and birds and fish filling the land and air and water.

And it is all good, so good that the Creator wants a companion with whom to share it and who will tend it.

“Then God said, ‘Let us make humankind in our image, according to our likeness.’ So God created humankind in their image, in the image of God they created them.”(Genesis 1:26-27)

Let us make humankind in our image.

The creation drama defines our role in the continuing story. Every one of us, no matter how different we may think the other is, bears the image of God and is called to help that image flourish.

To keep another person from accessing the goodness intended for them and all of us from the start, denigrates the image of God.

In contrast, when we recognize and affirm the full humanity of those the world thinks are outside our circle, we are imagining the world over which the Creator looks out and says, That’s good.

One year ago, Westminster began supporting Afghan refugees. A group of church members learned how to show appropriate hospitality to a family who had fled Afghanistan. They came from a completely different world and spoke little English. They were Muslim. They had no knowledge of daily American reality.

But with a little imagination, both the refugees and those welcoming them began to see themselves as siblings in the same human family. The Westminster team and the Afghan family now know what it means to be children of the same God.

And the Creator said, That’s good. Starting over.

Humanity is the product of God’s wildest imagination about what could happen in the created world. When we fall short of God’s intentions, which we do on a regular basis, we fail to live into what God had imagined we could be like.

The great story of Genesis frees us to trust our wondering about the universe and our place in it. Our faith requires imagination – curious exploration of what might be true beyond our tiny, limited view of the world.

Faith thrives on what Krista Tippett calls beautiful questions. If we cannot embrace mystery or accept the ineffable nature of our deepest longings, we may never come to trust in “the assurance of things hoped for…the conviction of things unseen.”

It takes imagination to be people of faith. The mission of the church, your work and mine – especially in these times – is to animate our capacity to imagine a different world, and our willingness to join others to help bring it about.

Let us make humankind in our image, the Creator says, and charge them with tending the garden and protecting the fullness of human life.

The biblical term for “image” comes from the Hebrew word shadow. In the minds of the ancients, a human being is the shadow of God. Imagine that: we are the outline of the light of God traced on earth, a suggestion of what love and grace, mercy and justice might look like.

Only the imagination of God would have dared place in each of us – with all our earthly foibles and failings – a flickering of the divine.

You and I are here today, at least in part, because we want to share in the imagination of God. We may not know exactly what that means, but when gloom closes in, whether personally or in the world around us, something bids us come, come to where hope may be found.

Nearly 100 years ago a man named Nicol Greene arrived in Minneapolis. He came from Scotland and settled with other Scots in an apartment building called “The Castle” in Loring Park. His family came a couple years later. His sons were four and seven years old.

One Sunday morning soon after they arrived the boys were playing outside when they heard the sound of bells. In this new and strange land, the bells reminded them of a place called church, a place they belonged.

Bells do that. They stir the imagination of the heart, summoning us to join others in common cause, whether religious or civic.

Those two boys ran back to the apartment, found their father, and told him that bells were ringing, and they had to go to church. Off they went until they found the church, this church, whose electronic “bells” were being amplified from speakers in the towers. They went to worship and stayed.

Let us make humankind in our image, the Creator says.

We’ve come together on this beautiful Sunday morning, with great joy, summoned to start over as stewards of the imagination of God.

Something new is happening. The children have returned. The singing is strong. The light around us has grown.