Who Will Be a Witness? 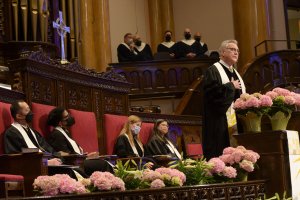 Easter, but not much on the very end. What the Church

calls the Ascension. We breeze past it on our way to

Pentecost and on into summer.

At the start of the Book of the Acts of the Apostles, which

is a continuation of the gospel of Luke, we are given a

window into the last moments of Jesus. His final words

are an instruction, uttered just before he ascends to heaven

– or “goes up with a shout” in the words of psalmist.

“So when they had come together, they asked Jesus,

‘Lord, is this the time when you will restore the

The disciples indicate here that they don’t quite

understand the point of the resurrection of Jesus, let alone

his entire ministry. They’re conflating their own desire for

power in the worldly sense with what Jesus has in mind.

“Jesus replied, ‘It is not for you to know the times or

periods that the Father has set by his own authority. But

you will receive power when the Holy Spirit has come

upon you; and you will be my witnesses in Jerusalem,

in all Judea and Samaria, and to the ends of the earth.’

When he had said this, as they were watching, he was

lifted up, and a cloud took him out of their sight.” (Acts

It is a dramatic ending, and clearly not what the followers

of Jesus expected or wanted. You will be my witnesses to

the ends of the earth. Not The kingdom will be restored to

Israel, and you will be back on top very soon.

The words in Acts echo the Great Commission – the other

final, gospel-ending story – at the conclusion of Matthew’s

gospel, where Jesus tells his followers:

“Go therefore and make disciples of all nations,

and of the Holy Spirit, and teaching them to obey

everything that I have commanded you.” (Matthew

Nothing there, either, that would have satisfied the

disciples’ desire for a return to power. Both of these final

scenes offer evidence one last time that Jesus is not

interested in earthly power. His hope is to change the

world in another way – by sharing the reality of the love

and justice of God. Jesus’ life, ministry, death, and

resurrection constitute good news the likes of which the

world had never seen or heard before. The story needs

telling. Who will be a witness?

Christianity is not meant to be kept secret, although many

of us treat it like that. We rarely talk about it. We could

work closely with someone and never know they were

persons of faith and active in a local church. We could go

to neighborhood gatherings over the years and never

mention that we’re members or leaders in a local

Are we embarrassed by our faith? You may have heard

the line: Preach the gospel at all times; if you must, use

words. I’m afraid that lets us off the hook too easily. Of

course, we should show our faith in how we live and in

our decisions, but we can also use words. Why the

reluctance? Would it feel as if we were boasting? Are we

afraid of being taken for “one of those kinds of religious

I admire my Roman Catholic and Jewish colleagues whose

clothing or head coverings give them away. Like a Muslim

woman in a hijab, they have no choice but to be public

about their religion by the way they appear. I can get

away with passing as “normal” and non-threatening.

When I meet a new person, I often avoid saying what I do

for a living because when they hear it, it often cuts off

conversation. Sometimes that can be a good thing. Maybe

we should strategically deploy the mention of our faith.

My dad, who was also a Presbyterian minister, once went

golfing with three strangers in Scotland. He was a visitor

to the course, and they needed someone to complete a

foursome. The three were raucous guys, drinking on the

they kept asking my dad what he did for a living. He

managed to avoid the question for the first nine holes.

But on the second nine, they insisted he tell them. Not

being one to prevaricate, he finally said he was “in the life

insurance business.” They asked the company name. My

dad thought for a moment and said, “Eternal Life.”

It was a very close game that day on the course. As they

were teeing up on the 18th hole, my dad finally told them

he was a Presbyterian minister. Needless to say, he won

There’s a time and a place for witnessing to our faith, and

aiming at: to be a witness to Jesus and his way should

shake things up a bit.

The biblical Greek for witness is martyr. Its original

meaning was simply someone who had seen or

experienced something about which they were willing to

speak and tell others, and in the case of the early church,

that meant talking about Jesus of Nazareth. But as

persecutions of Christians began spreading through the

Roman Empire, the followers of Jesus who were witnesses

in places where that was prohibited were often arrested

and, if they refused to recant, put to death. Martyr then

became connected to dying for your faith.

Witnessing was dangerous business because it pointed to

an alternate reality outside the control of the powers of the

time. The first Christian martyr mentioned in scripture is

Stephen, also known as the first deacon selected to serve

the church. Stephen was simply a witness, and a good one

at that. Read about him in the 6th and 7th chapters of Acts.

He couldn’t stop talking about Jesus, so they stoned him

to death – the first martyr, as we understand the term

The biblical standard for witnessing to the faith, and that

of the first Christians, is this: Does the story you’re telling,

the life you’re living, challenge the way earthly power is

being used against God’s intentions for human

community? Does your witnessing get you in “good

That standard, which held for the first three centuries of

the Church, changed abruptly for the early church in the

to Christianity and decreed that henceforth it would be the

religion of the empire. The church left the streets and

villages and the edges of acceptability and came inside. Its

role, which had been to critique the world around it,

shifted largely to only being about spiritual matters and

theological disputes. It was subsumed by political power

and eventually became indistinguishable from empire –

and the church has been burdened by its association with

empire and colonial power ever since.

Whether in the creation of feudal systems that oppressed

illiterate masses in the Middle Ages the Church was there,

or in the conquest of indigenous lands the Church was

there, or in the enslavement of African people the Church

was there providing theological rationale, or in the

exclusion of LGBTQ folk or the pushing aside of

differently-abled persons or the control of women and

their bodies, the Christian Church – or at least large parts

of it – has been there, colluding with empire and

embracing power that Jesus simply would not have

Maybe that’s why sometimes we don’t want to out

ourselves as Christians. Who wants to be part of such a

The power Jesus refers to in Acts gives his followers the

courage to witness to a reality outside empire – where

dreams and angels are found, where a rainbow is a

promise, where a boy uses a slingshot to fell a mythical

giant, where water springs up in the desert and dry land

rejoices, where a child who is God-with-us is born in a

garage behind a cheap motel to poor unwed parents,

where those shunted aside are now included, where

justice rolls down like waters, where healing happens and

miracles abound and death is defeated by death itself and

life breaks free of the tomb.

That power gives birth to the Church. That power

summons those who would follow Jesus to give witness to

it, no matter what it costs them. That power springs from

Lord? was sung by enslaved Africans and their

descendants. They were on the receiving end of abuse by

white society and its churches and economy, but the song

knew something else. The song knew that the power God

gives is beyond the reach of empire. In fact, it resists

empire and subverts it. That story is gospel, and it needs

telling, and in telling it and singing it and living it and

trusting it, hope emerges. And that hope begins to bring

the alternative reality of the reign of God to life among us.

Who will be a witness?

My grandmother, a faithful Baptist woman in small town

Indiana, my mother’s mother, was among the first people

outside my immediate family I was aware of who

intentionally witnessed to the love of God. Like a good

Baptist. She was a bona fide church lady, that is, her life

centered around worship and Bible study and care for

others. After my grandfather died, for the next 40 years

she regularly made the rounds to those in need. Into her

90s she visited the “elderly” and those who were

homebound – all because she felt compelled to tell the

story. She was a witness, and I am here today at least in

At last week’s memorial service for Walter Mondale the

family asked me to speak about the formative influences

that shaped his life and service. Others, they said, would

cover his contributions to Civil Rights and the women’s

movement and stewardship of the earth. My role was to

talk about the source of his commitments.

Mondale did not wear his religion on his sleeve, but that

of justice and equity, humility, and mutual love. His life

and public service were steeped in biblical values. When

summed up their administration by saying, simply: We

told the truth. We obeyed the law. We kept the peace. That

may not be a recipe for political victory in America, then

or today, but it is testimony to gospel values.

Because of its position and privilege, Westminster can find

it challenging to follow Jesus – to be a witness. We’re the

largest Protestant church downtown and one of the largest

churches in the denomination. We inhabit a prominent,

among our members public figures, a US senator, leaders

of business, medicine, and higher education. We have an

Before I came to serve this congregation Dan Little, the

years was a good friend. One day before I began here, he

gave me advice that I have remembered: “This place can

be seductive. Be careful.”

That was not advice only for me, but for this historic

Westminster can forget that it is following Jesus, and not

the way of the world. With all the trappings of success we

can get confused and lose our way. The power of the

world extracts and consumes and maintains the status quo

and competes to win; in contrast, the power Jesus gives

has love of neighbor at its core.

As Westminster re-opens its building and re-animates its

on-site ministries, and the city comes back to life after twoplus

years of isolation and slow-down, we will need to

sake, and instead discover how God is at work in us to

give us the courage to follow Jesus in new ways.

faith. It should not be kept secret. We can even speak of it

to others. But we must take care not to weaponize it for

purposes antithetical to the gospel.

Why not this thriving downtown congregation in one of

America’s great cities, this church that longs to participate

in God’s unfolding love and justice?