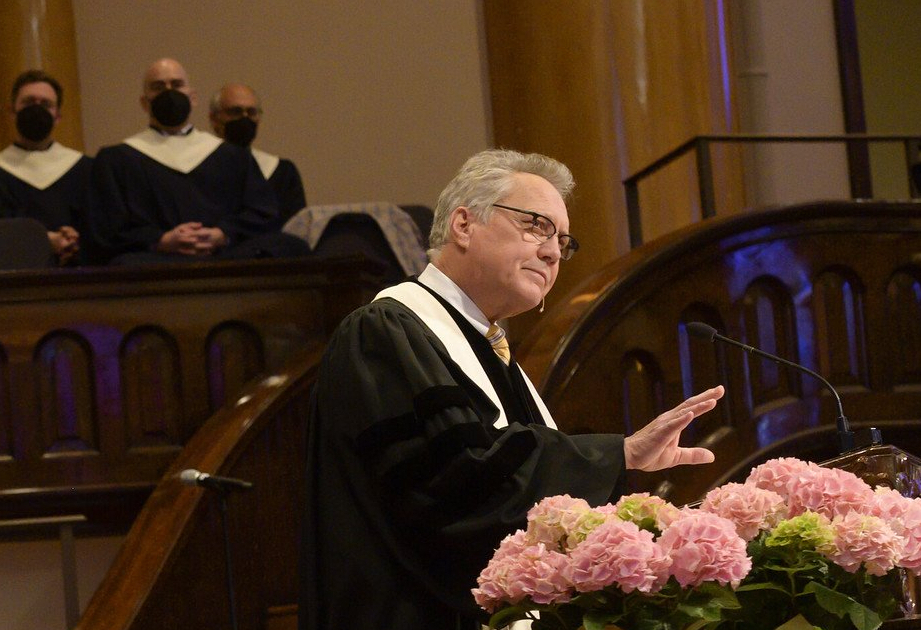 “You did not choose me,” Jesus says, “But I chose you. And I appointed you to go and bear fruit, fruit that will last.”

I chose you. The words of Jesus in the gospel of John brush up against a Christian teaching for which we Presbyterians have long been known – something called predestination. Often misunderstood or simply ignored, predestination is a theological claim that causes consternation for preachers, who tend to avoid it – which is why I’m preaching on it today.

Some see predestination as the foreordaining of everything that will happen – that every little thing that occurs in life is known and planned by God. There’s the story of a Presbyterian minister ascending the steps to the pulpit one Sunday when he suddenly trips and falls. He stands up, looks out at the congregation, and says, “Glad I got that over with.”

“[W]e say that God once established by His eternal and unchangeable plan those whom He long before determined once and for all to receive into salvation, and those whom, on the other hand, He would devote to destruction.” (Institutes of Christian Religion (1559), book III, ch. xxi)

Oh – my goodness. The idea that God would elect some human beings, made in the divine image, to be saved, while others, made equally in God’s image, would be consigned to eternal damnation stretches theological credulity and ignores the witness of scripture. Double predestination was an attempt to underline the absolute lack of human agency in our relationship with God. It was meant to counter the kind of faith against which the Protestants of that time were rebelling – that some power on earth, say, the Roman Catholic Church, had control over admission to heaven. Or that by our works – by what any one of us said or did – we could earn God’s favor.

Calvin and other reformers were fairly obsessed with the doctrine of grace alone. In their zeal to counter the influence of works righteousness, they went too far and complicated things by arguing that even anyone who landed in Hell did so because God had decided to put them there long before they came into this world.

Most Presbyterians today, including this preacher, have abandoned double predestination and now instead talk about being elected or being chosen by the grace of God, whether deserving or not.

When I was in seminary, many years ago, I remember answering the doorbell one day and being met by a couple Jehovah’s Witnesses. I’ve always been fascinated by conversations with such visitors, so we stood at the door and talked. Besides, I had just completed my biblical Hebrew class and I wanted to make good use of what I had learned.

I told them, in a moment of seminary wokeness, the name Jehovah is not actually found in scripture. Jehovah, I explained, is an invented word made up by mashing together several different Hebrew words for God. Why use a non-biblical name for the Almighty, I asked, forgetting that one of my favorite hymns is Guide Me, O Thou Great Jehovah.

They were not persuaded. Probably thinking I was a lost soul, they countered by asking if I had “made a decision for Christ.”

Now I was in trouble: I hadn’t yet taken that class. I had been around the Presbyterian Church all my life, but we didn’t use that kind of language about our faith. I sensed that it wasn’t the right question but wasn’t sure why. It seemed to put me in the driver’s seat of my relationship with the divine, and I felt inadequate to be in that position.

Where was the gospel of John when I needed it? You did not choose me, Jesus says, but I chose you. The important decision in our lives in terms of our relationship with Jesus Christ, and with God through Jesus, is not one we make. That decision has already been made.

My actions and my choices and my adhering to any particular creed are immaterial when it comes to the salvation of my soul. God’s grace alone saves me. Nothing I do can alter the divine decision for me and for you. We might think we’ve been searching for God when the reality is, God has been searching for us all our lives. God has decided for us already.

By the grace of God, we – you and I – have been chosen – predestined, we could say – for eternal salvation. What are the implications of that good news for our lives? What is our response to God’s grace?

“I appointed you,” Jesus says, “To go and bear fruit, fruit that will last.”

Christian faith lives in response to the saving grace of God, not to earn God’s grace, but to show it. It doesn’t need to be any more complicated than that: bearing good fruit in the name of Jesus.

“This is my commandment, that you love one another as I have loved you.”

We are chosen to love. It is love, after all, God’s love, that has chosen us. When we love others, we activate and experience and share the love of God.

In preparing for a memorial service recently I spoke with a family about the one who had died. They told stories and shared memories and laughed as they remembered many decades of life together. They expressed sorrow and shed tears and said how much they missed them. They were showing not only their love, but God’s love. The love they had experienced and about which they were talking offered a window into the holy. God came close in that conversation.

“God is love,” we read in I John, “And those who abide in love abide in God, and God abides in them.”

Love has a Source beyond any of us. It is not of our making. We catch a glimpse of that Source when we love others and are loved by them.

Love in the way of Jesus has at least three characteristics:

First, love is doing, not feeling. The over-sentimentalized version of love popular in American culture is not the love Jesus asks of us. Love is known by its deeds, not by its words. We cannot say we genuinely love if we do not show it – whether in a family or a marriage or friendship. Love is, as love does.

When I have spoken with someone who has been on the receiving end of domestic abuse, this topic comes up. Domestic abusers typically say they love the one they are hurting, but their actions show otherwise. That is not love.

As the Apostle Paul says,

“If I speak in the tongues of mortals and of angels, but do not have love, I am a noisy gong or a clanging cymbal… Love is patient; love is kind; love is not envious or boastful or arrogant or rude. It does not insist on its own way; it is not irritable or resentful; it does not rejoice in wrongdoing, but rejoices in the truth.” (I Corinthians 13:1, 4-6)

When love is genuine it bears good fruit by what it does.

Second, love in the way of Jesus, is other-centered, not focused on self. This is the kind of love that will get us in trouble. Good trouble. It’s the love that causes us to speak up when someone is being unfairly treated. It is the love that will lead us to take unpopular stands because we have centered others outside our own group, not ourselves.

One of the most radical lines in the Presbytery Church constitution says this: “The Church is to be a community of faith, entrusting itself to God alone, even at the risk of losing its life.” (PCUSA Book of Order, F-1.0301)

“No one has greater love than this,” Jesus says, “To lay down one’s life for one’s friends” – which is what he does on the cross.

When our love is other-centered, we bear the good fruit Jesus asks of us.

Third, love has a public dimension and is not confined only to the private or individual. Love in the way of Jesus will necessarily draw us into the community. Christian faith leads us into the realm of politics – not partisan positions but matters of public policy – because that is where the justice Jesus seeks is being worked out among us. One of the new members joining the church today cited the Cornel West quote posted on the 12th St. side of the church as part of why they wanted to be part of Westminster: Justice is what love looks like in public.

In a time where multiple mass shootings have taken place, love compels us to advocate for change in our laws and to ask what elected officials are doing about gun violence. A week after racial hatred killed ten in Buffalo, New York, and a person in a Presbyterian church in southern California, and two years after the murder of George Floyd by police officers, love compels us to insist elected officials lead the nation in undoing the legacy of racism in America. In a time when lies are brazenly asserted and threaten to dismantle democracy, love compels us to stand up for truth, because truth leads to goodness. Love is found in truth.

We are chosen to love, you and I, predestined to love, even commanded to love, by Jesus, the one we follow. Love that compels us to do all we can to make this a more just, peaceful, and equitable world will eventually bear good fruit. It may take time, but it will be “fruit that will last,” as Jesus says.

In the conversation I had long go with the two visitors at my door who asked if I had “made a decision for Christ,” a better question for us to talk about might have been: Since you have been saved by God’s grace, how are you responding? Where are you showing the love of Jesus in your life? 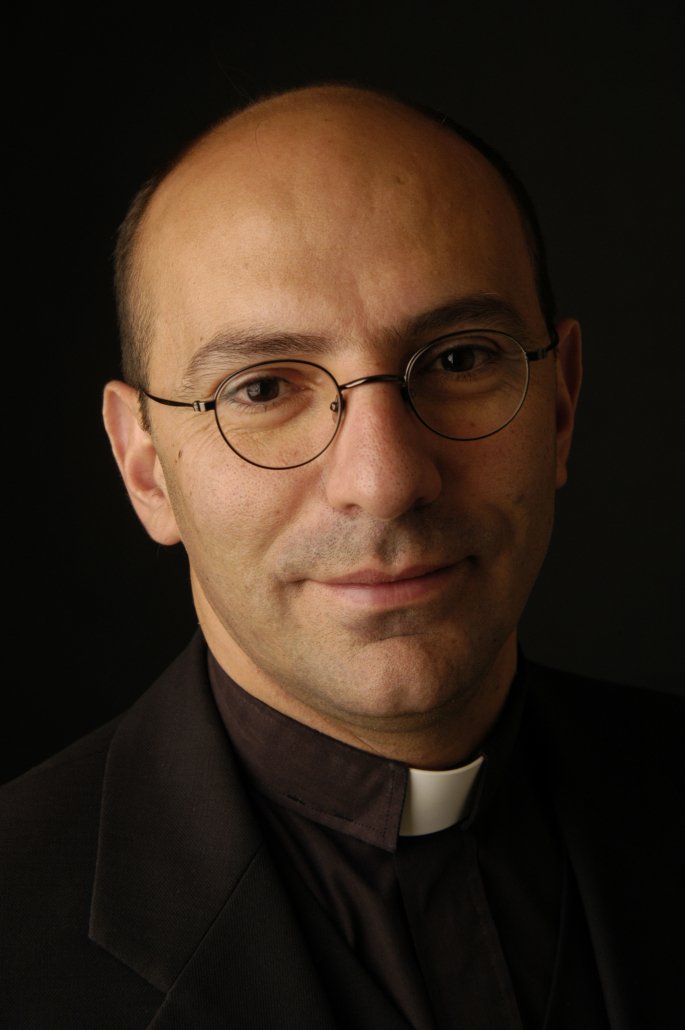