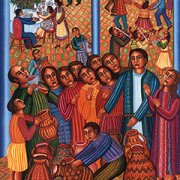 The art of John August Swanson can be found throughout the Westminster Gallery and building. His bright and colorful images appear to glow from within. The process for printing these serigraphs is a technique that is a cross between a stencil and a silkscreen. Transparent and opaque, matte and glossy, the inks are printed as small dots that become luminescent to our eyes.

John is a life-long resident of Los Angeles where he was born to a Swedish father and Mexican mother. His father spent much of his life on the streets, and John often searched for him. The artist Sister Corita Kent found John and became his mentor. Together they created graphic art that demonstrated against war and advocated for the ordinary person through a variety of social justice themes.

While John’s primary body of work is his Biblical images; his work also featured musicians, acrobats, and the circus. Later in his career he returned primarily to his early social justice focus and has produced many graphic posters. The Westminster Collection is fortunate as John has gifted us with a complete set of these posters.

The Westminster Collection of John’s work has also grown with the recent gift of several serigraphs given in memory of John C. Salzsieder. Loaves and Fishes, Wedding Feast, and Take Away the Stone can be viewed in the hallway connecting the sanctuary and the Westminster Gallery.

I am sad to report that John died on September 23 after a short time in hospice care. May his gentle and loving spirit live on in the beauty of his art.