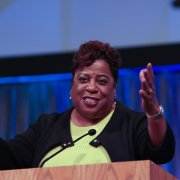 As we continue our “Year of Listening” at Westminster, we have invited the Rev. Dr. Diane Moffett to join us as guest preacher on Sunday, May 23. For nearly three years, Diane has served as president and executive director of the Presbyterian Mission Agency (PMA), the mission arm of the Presbyterian Church (U.S.A.). As we prepare for the one-year mark from when George Floyd was killed in our city of Minneapolis, we will listen as Diane shares her wisdom regarding areas of our world – and maybe our own lives – that need transformation.

Diane has preached at Westminster previously, most recently for Martin Luther King Holiday weekend in 2019 when she led a workshop on Saturday and preached in worship on Sunday.

Prior to her current role, Diane served as senior pastor of St. James Presbyterian Church in Greensboro, North Carolina. While there, she also served on several boards, became a candidate for mayor of the city, and was co-chair of the Greensboro Interfaith Clergy Council and vice president of the Pulpit Forum. In April 2018, Diane received the Sojourner Truth Award, the highest honor of the National Association of Negro Business and Professional Women’s Clubs, for her commitment to serving others.

Diane is married to Mondre Moffett, a trumpeter and professor of Black music studies at North Carolina Agricultural and Technical State University. They have three daughters and five grandchildren.