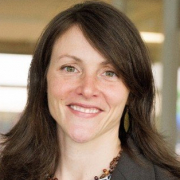 After receiving more than 130 applicants for Westminster’s Senior Director of Operations and Administration position, the hiring team has selected Nicole Cueno for the new position. “We are pleased to have found someone with her experience, skill, and commitment,” says Senior Pastor Tim Hart-Andersen. “Nicole will be a wonderful addition to the Westminster staff team.”

Nicole most recently served as Chief Operating Director for The Loppett Foundation, Inc., in Minneapolis, and previously worked at the Minneapolis YWCA as Assistant General Manager and Event Director. Nicole says she is thrilled at the opportunity to work at Westminster. “I have been overseeing personnel, budgets, and operations in nonprofit settings for the past 15 years,” says Nicole. “Dimensions that resonate most profoundly are those indicating Westminster’s collaboration with and service to its vibrant and diverse community.”

A former volunteer with Open Arms of Minnesota, Nicole has also served as a skiing coach with Minnesota Youth Ski League, and track and field coach at Highland Park High School in St. Paul. An avid runner, Nicole has run marathons, triathlons, and was named Minnesota Runner of the Year in 2015. Nicole has a bachelor’s degree in religious studies and gender studies from Grinnell College in Iowa and a master’s degree in evaluation studies from the University of Minnesota.