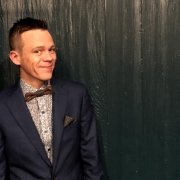 Westminster Town Hall Forum Advisory Board Chair Megan Dayton is pleased to announce Tane Danger as the new Director of the Town Hall Forum. Best known as the co-founder and host of the nationally renowned civics-inspired improv comedy show, The Theater of Public Policy, Tane has built a career bringing people together to grapple with big ideas.

“Westminster Town Hall Forum is the largest and most prestigious speaker series in Minnesota and the upper Midwest. I am humbled and excited for the opportunity to build on the Forum’s 40-year history and begin a new chapter of bringing people together to engage with big questions and ideas,” Tane said. He begins the new position on December 1.

“Tane brings a unique combination of skill and experience to the Westminster Town Hall Forum,” said Tim Hart-Andersen, Moderator of the Forum. “With his public policy background and skill in promoting and producing, he will broaden the reach of the program. And I am especially eager to see how the new Town Talks series will expand under Tane’s leadership.”

The Westminster Town Hall Forum began in 1980 with a mission to engage the public in reflection and dialogue on the key issues of our day from an ethical perspective. Since then, more than 250 speakers have addressed Forum audiences, including, among others, Archbishop Desmond Tutu, Kathleen Hall Jamieson, Elie Wiesel, Barbara Brown Taylor, Thomas Friedman, Cornel West, Marian Wright Edelman, David McCullough, Marcus Borg, Gwen Ifill, David Brooks, Salman Rushdie, and Bryan Stevenson.

“The Town Hall Forum offers an opportunity to bring important voices to our city and to open up a dialogue about issues and ideas,” Tane said. “But the Town Hall Forum is not just any speaker series, it is a series rooted in looking at things from an ethical perspective, and to be a part of it as the director is a dream come true for me.”

As The Theater of Public Policy’s host, Tane has interviewed more than 500 people, from journalists and academics to political leaders and authors since the show began in 2011. But what makes the show different is that after the interview, a cast of Minnesota’s sharpest improvisers take everything that’s been said and turns it into entirely unscripted improv comedy theater.

Tane grew up in Hollywood, Florida, and came to Minnesota to attend Gustavus Adolphus College. In 2014, Tane won a fellowship from the St. Paul-based Bush Foundation, which helped him earn a Master’s of Public Policy from the University of Minnesota’s Humphrey School of Public Affairs. He lives in South Minneapolis with his fiancé Eric.