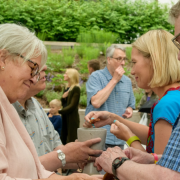 Not many of you should become teachers, my brothers and sisters, for you know that we who teach will be judged with greater strictness. 2 For all of us make many mistakes. Anyone who makes no mistakes in speaking is perfect, able to keep the whole body in check with a bridle. 3 If we put bits into the mouths of horses to make them obey us, we guide their whole bodies. 4 Or look at ships: though they are so large that it takes strong winds to drive them, yet they are guided by a very small rudder wherever the will of the pilot directs. 5 So also the tongue is a small member, yet it boasts of great exploits.

How great a forest is set ablaze by a small fire! 6 And the tongue is a fire. The tongue is placed among our members as a world of iniquity; it stains the whole body, sets on fire the cycle of nature, and is itself set on fire by hell. 7 For every species of beast and bird, of reptile and sea creature, can be tamed and has been tamed by the human species, 8 but no one can tame the tongue—a restless evil, full of deadly poison. 9 With it we bless the Lord and Father, and with it we curse those who are made in the likeness of God. 10 From the same mouth come blessing and cursing. My brothers and sisters, this ought not to be so. 11 Does a spring pour forth from the same opening both fresh and brackish water? 12 Can a fig tree, my brothers and sisters, yield olives, or a grapevine figs? No more can salt water yield fresh.

My dad has always said that parenting was easy until my sister and I learned to talk. Talking changed everything. I understand this now as a parent, myself. The words that are hurled around are hilarious but also make me think my kids should go to law school, as they are already world class negotiators. When kids speak we take them with a grain of salt because they are just learning the power of their words. It’s funny. Often it’s tender. There’s a wistfulness to the words children use- unadulterated, joyful, and free. But, as we grow and experience the complexity and hypocrisy of the world, our words reflect pain, fear, anxiety and injustice, or they inflict these things on others.

The book of James was probably written by James the brother of Jesus. So, it’s no wonder that in his words we sense some prophetic anger. His brother was killed by the rulers of the day, and he was surrounded by a community of Jesus’ followers who were trying to differentiate themselves from a cruel world. For these early Christians words held power for life and death. Their words were what would draw others into their community or not. James’ writing and the words of these early Christians were identity forming and creedal, aiming to create cohesion, understanding, and wisdom. We read them as odd and outdated, maybe, and wonder what the spirit is underneath the words, but their poignancy hasn’t changed. We’re all still searching for those words or that moment when we will be startled awake from complacency, and life will begin again. The words we choose are a gauge of who we are at our core and what we believe in. They don’t have to be fancy, or even consistent, but there is something inside us, I think, that yearns to articulate what we think, feel, and know to be true.

A member of Westminster and I have been texting recently. She is in a Bible study that has many more theologically conservative women in it than she is used to. But, she loves the study and the friendships, and they offer childcare so she continues to go. She’s deeply uncomfortable, however, with their language around sexuality and how, they say, God feels about it and their teaching that we are called to judge others based on their sexual orientation. She was asking me to coach her through this- what language to use to gently enter into disagreement without creating conflict. I did my best to help her, but as we were typing I kept thinking to myself, we can really oppress people by forcing them to articulate what they believe. If there isn’t hospitable invitation into expressing ourselves, and our deeply held sense of who we believe God is, then what emerges is othering, fear-mongering. And why isn’t it enough to simply state that, overwhelmingly, scripture shows us that God is love? A more accurate synopsis of the Bible could not be uttered.

Some people think the book of James isn’t even Christian because it almost never mentions God or Jesus. Yet, it is the book that famously says if you’re Christian and you don’t act like it, then your faith will deteriorate. You have to talk the talk and walk the walk. James says that our words are like a rudder on a boat- small in size but they steer the whole ship. In 2020 that metaphor is magnified. With the exponential growth of social media, direct messages, email, and texting in our short lifetimes, words overwhelm us. Just a short time ago, in our modern memory, words existed only in printed materials, which required editing and time. And, just 500 years ago most people didn’t have access to any written words, until the invention of the printing press. There is something liberating about our mass production of words- it gives power to those who had previously been voiceless or who went unpublished because of their race or sex or lack of education. But, there is also something scary about them, too, how words are everywhere- an endless stream of them. A 2016 study- so this is old news- said that highly educated boomer and gen-x subjects who were managers or professionals in their fields spent on average a full third of their workweeks processing email. We are consumed by words that lack thought process and meaning, to the point that all words have lost a little bit of their weight, and much of our attention.

Teju Cole, a writer for the New York times, says that with the advent of modern technology we are experiencing the loss of forgetting. There are certain things that have been exposed because of our ability to share more words than ever before, but, he writes, “nothing is ever really gone. Somewhere out there, perhaps in the cloud or in some clandestine server, is our interaction… In these all-seeing days, the traffic between memory and forgetting becomes untrackable… we can sense it crowding in on ongoing experience, imposing closure on what should still be open.” Our world has become so verbose we have a hard time honing-in on what is important, or essential. We can’t unplug, the search bar is a bottomless pit, and we might have reached the point that we are so overly connected we aren’t really connected at all, anymore.

I think James, even though he sounds imposing, was dramatically trying to reach the hearts of his hearers with these intense metaphors. As my friend Sarah says, James’ words are like a salty bite of sharp cheese after too many sweets. And that is what the Gospel is supposed to be for us- an awakening that compels us to think and act and believe differently. James’ words to those early Christians may sound like a hopeless indictment- making us feel like all the dumb things we say will stay with us forever. But, I tend to think they are more like an acknowledgement of our shared humanity. We have all fallen short, have all said things we didn’t mean. We are all subconsciously wired to think words and thoughts that judge and perpetuate stereotypes, and most often we say the worst things to ourselves and those closest to us. Here in community, though, in the body of Christ, we are all connected by the language of love, unconditional, inconvenient, difficult, messy, love your enemy kind of love, and we’re offered words of grace every week if we allow ourselves to have them.

Speaking of grace, I hope you show yourself some this season. I’ve become aware just this year that for many people Lent can be a time that triggers our mental health. For some, the words we use around fasting or giving up something can perpetuate negative self-thoughts and anxiety that we aren’t doing enough or that we aren’t enough. I read a very honest article recently about someone struggling with this, and she wrote so beautifully about Spring, Lent, and navigating her mental health through it all. She said, “Right now, I am doing fairly well, but that doesn’t mean my depression is gone. It is Spring, and it is Lent. When I was four, we had a priest who talked about Lent being the season of Spring in the church, and I love that image. Spring comes as a slow, soggy, snowy mess of a season that eventually grows into the buds of new flowers. I am still in that messy state. I am doing better, but a really bad bout of scrupulosity in February made me realize that giving things up for Lent this year might end up harming instead of healing my relationship with my faith. I am still trying, at least for this Lent. It is Spring, and eventually something will grow, and resurrect, even if the snow is not yet gone.”

We decided to use this Lent season, these forty days between Ash Wednesday and Easter, to focus less on words that mystify us, and more on the tangible things that sustain us- the earth, water, our fleshiness. These things aren’t abstract, but grounding. Lent suggests we pare down our lives to what is essential, to focus on our relationships, and our association with what is real. James uses the very straightforward image of fresh water and salt water to make his point. Water may seem like it’s all the same, but there are differences. Words can seem all the same, they all come out of the same mouth, but we use them to both bless and curse others, and the greatest amount of damage or hope they can offer is how we use them to talk to ourselves. Our lives can be both a blessing, but also hurtful, and James encourages us to pay attention to the difference. To be aware. Lent is a time set aside for feeling and yearning, for considering what is adding to life and what is not, for deciding how we will move and make our way on the earth, for being more intentional and less reactive, for using our words toward worship and love. In a world and culture that is so hyper-focused on critique, assessment, dichotomies of right and wrong and using all the words in our dictionary to pin point who we are or what we should be, we can be countercultural. James’ metaphors, even in their sharpness, redirect us to be gentler with ourselves and those we hold dear. To pause. To slow down before we speak. And then when we do say something, to actually say. something.

My prayer for you this Lent is just that. Ground yourself in what is real. What is true. Let fresh water sustain you and salty water buoy you. And may you hear again and again these essential words: You are loved. Amen.