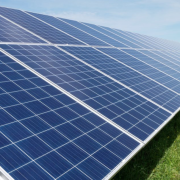 Westminster recently entered into a 25-year contract that requires Xcel to acquire electricity in an amount similar to what Westminster uses each year from a community solar garden run by ReneSola Power. A community solar garden contains solar panels that convert the sun’s rays into electrical energy. The advantage of a solar garden is that it allows the cost of solar panels to be distributed among the community of subscribers so they can be built less expensively than by individual subscribers on their own. Another advantage is the size of a solar garden.

Westminster’s city block is not large enough to provide all of Westminster’s electrical needs. In addition, portions of the block are shaded by neighboring buildings. Westminster consumes 1 million kilowatt hours of electricity per year. It takes an area of more than nine city blocks of solar panels to generate Westminster’s electrical needs. ReneSola Power’s solar garden is 20 acres in size and is located near St. Cloud. The area had been farmland, growing a monoculture of corn. The farmer still owns the land, but leases it to ReneSola Power, which planted the land around the solar panels with native habitat for pollinators.

By subscribing to a community solar garden, Westminster is supporting solar development in Minnesota. Westminster will pay a flat rate for its electricity over the next 25 years and will save an estimated $1 million over that time as fossil fuel based utility rates continue to rise.

Subscribing to a solar garden can be more difficult for individuals because the average homeowner moves every seven years. The most environmentally friendly kilowatt hour is the one you don’t use! Energy efficiency and smart energy use can make a big impact. Check out Xcel’s Windsource or Renewable Connect programs for clean energy options.