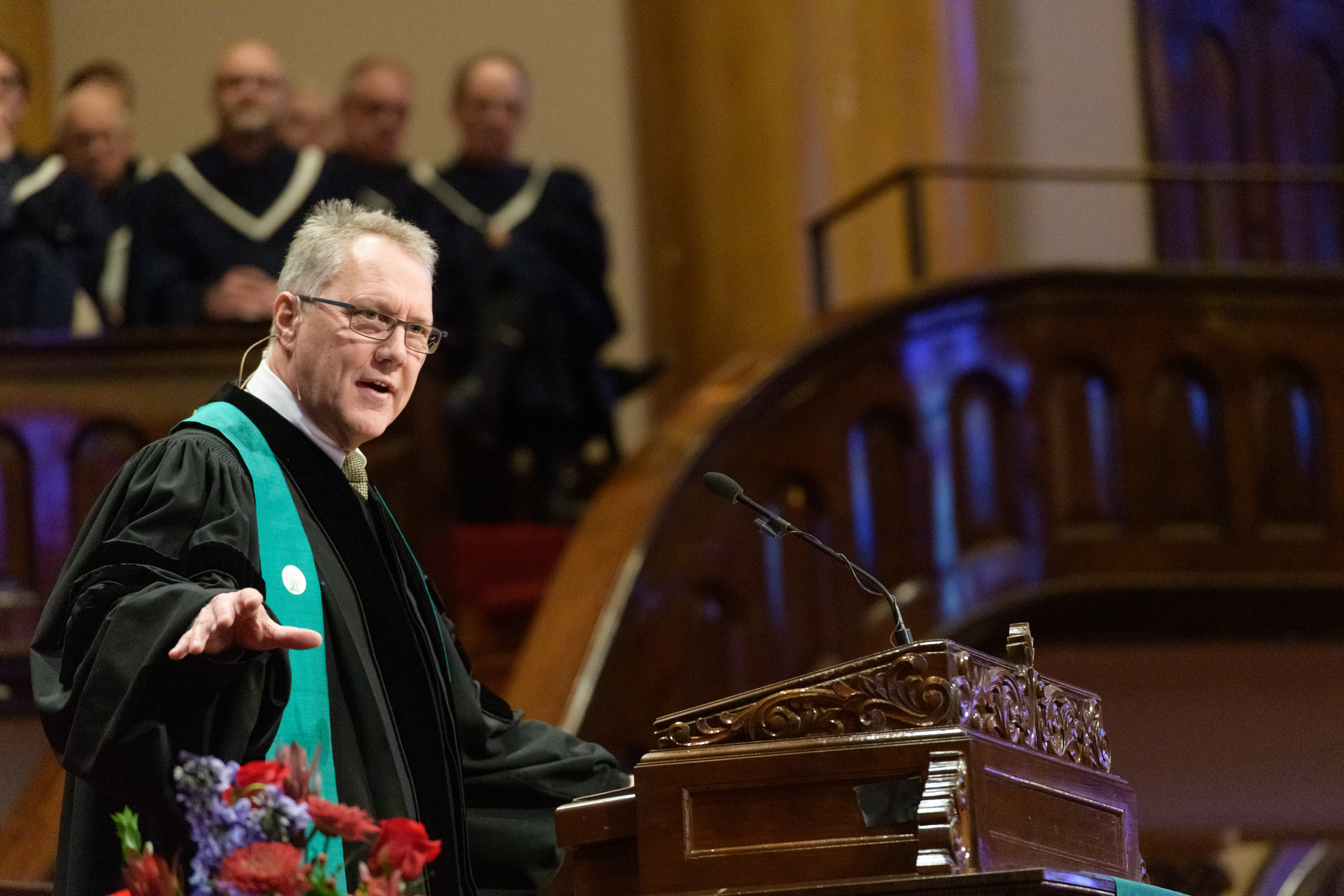 In the high plateaus of south-central France lies a little town called Le Chambon sur Lignon. The village was settled by Reformed Protestants, French Presbyterians, called Huguenots, in the 1600s.

In the mid-1700s the Huguenots suffered terrible persecution at the hands of Roman Catholic France. The Protestants never forgot. Remembering their own persecution, the Huguenots dedicated themselves to the protection of others threatened with oppression or violence. I have visited Le Chambon twice, most recently this past June, and each time I came away profoundly moved by the witness of that community.

After France fell to Germany during World War II, the villagers of Le Chambon began protecting and sheltering Jewish children and others pursued by the Nazis. They made their way to the isolated, high plateau seeking shelter. The French Presbyterians of that region, and also some Catholics, quietly collaborated for several years in the rescue of hundreds, perhaps thousands, of children. They hid them and transported many to neutral Switzerland.

The people of Le Chambon had no grand plan, no carefully-developed strategy to protect and spirit away all those children. The rescue effort had started simply because the villagers knew it was the right thing to do. Their faith had taught them that. They received no reward or benefit or recognition (until many decades later) for saving the children. In fact, they did so at enormous risk to their lives.

The Huguenots of Le Chambon were practicing a Christianity that has deep roots in the Hebrew tradition. They knew in their bones that life was to be lived in covenant with one another, especially with those deemed unacceptable by others. That was, after all, the way of Jesus, who ate with the outsiders, and healed them, and embraced people everyone felt were undesirable.

There’s never much to be gained by doing that. The religious authorities in his time complained against Jesus, saying, “This man welcomes sinners and eats with them.” Consorting with the wrong people in the eyes of privilege and power may land us in trouble. (Luke 15:2)

Jesus was enacting in his time the foundational stories of old, where God establishes covenant as the key feature of the relationship between God and humankind and within human community.

At the conclusion of the story of Noah and his ark God makes a decisive move.

“Then God said to Noah and to his children…‘As for me, I am establishing my covenant with you and your descendants after you…that never again shall all flesh be cut off by the waters of a flood, and never again shall there be a flood to destroy the earth.’” (Genesis 9:8, 11)

In that biblical God chooses to move from a contractual relationship – I will give you this if you do that for me – to a covenantal relationship where the promise of love is freely offered. No longer would the relationship between Creator and creature be determined in a transactional way. The love of God would not be withheld if the terms of the relationship were not met.

In our time we have contracts for everything: credit cards, ride-sharing, leases, mortgages, employment, technology, pre-nuptial agreements. We live in a transactional age in which our relationships are largely contractual. Maybe that’s how it has to be in our litigious era, but sustainable, healthy relationships, whether individual or in community, were not meant to be transactional.

We cannot truly understand or practice Christian faith without grasping what it means that ours is a God of covenant, a God of promise, a God who loves unconditionally, and extends that promise even to those thought to be unlovable or undeserving. The mutual, self-giving, generous, justice-seeking love of covenant defines the relationship God has with humanity and that God desires in human communities.

After its introduction in the story of Noah, the ideal of covenant life, at first extended fully to all creatures, then gets a sharper focus with Abraham and Sarah. And then that covenantal language runs throughout the Hebrew Scriptures, in the books of wisdom and in the psalms and in the prophets. We hear it most often when the people of God fail to live up to its standards.

The villagers of Le Chambon did not think they were being heroic; they were simply practicing covenantal living in their time and place. It was merely the right thing to do. To live in covenant with others means being willing to welcome the dispossessed and despised, the hated and the hunted, solely because they are fellow human beings. Jesus’ commandment to “love our neighbor as ourselves” is maybe the simplest description of covenantal love.

The elders on Westminster’s governing board have received a letter from one of our church officers who’s a high school student proposing that Westminster consider becoming a sanctuary congregation. A sanctuary church makes its building available to people at risk of being deported and who are seeking shelter in a safe place.

Session meets this week and will probably refer the idea to a committee because that’s how we work. I don’t know what will come of it, but that young church officer is asking the right question of us: as people of faith, what does it mean to live in covenant with those outside the circles of power and privilege? And there are few in our country today further outside those circles than immigrants and refugees and families being separated at the border.

The letter with the sanctuary proposal quotes the book of Hebrews: “Do not neglect to show hospitality to strangers, for by doing that some have entertained angels without knowing it.”

And it cites Leviticus: “Cursed is anyone who withholds justice from the foreigner, the fatherless or the widow.”

That high school youth understands that to live as faithful, covenant people in our context requires struggling with the treatment of refugees and immigrants and other issues. The same may be said for racial justice, economic disparities, and differing educational opportunity. A commitment to covenantal living will inevitably draw us into places of controversy and conflict, because most of the world, especially in our land these days, does not live by those rules.

In interviews after the war the villagers in Le Chambon said they knew what they were doing was illegal and could result in their arrest or worse, but they hid the children anyway. Life in covenant with others is like that; it causes us to rethink how, and why, we are living, if not for something like that.

“The primal disclosure of the Bible,” Walter Brueggemann says, “Is that this God in heaven makes a move toward earth to identify a faithful covenant partner.”

When we live in covenant we can expect that the relationship with others will changed us. Think of the marriage covenant. We freely give up some of our autonomy to live as committed, lifelong partners, “for better or for worse.” Marriage changes us. Authentic relationships do that.

“One cannot embrace,” Brueggemann says, “Without being transformed by the ones who are embraced. There is no immunity for God here; embracing a partner is not an after-thought, but is definitional for God.”

And it is definitional for us: we are created for community. for covenantal relationship.

Why covenant? Without it we live in a world that lacks a shared vision, that has no common ethic,  that refuses to include others, that lives solely for self or for one’s group.

“The move God has made in heaven,” Brueggemann says, “Opens up for us a new agenda: What is possible on earth? God’s move to solidarity is a hint that solidarity on earth is possible.” (http://www.religion-online.org/article/covenant-as-a-subversive-paradigm/)

In the face of what seem to be overwhelming odds against it, Covenant gives us a way to begin to understand how we might transform our fragmented social order. It helps us as people of faith to frame how we shall live. Every major challenge facing the human community – from climate change to ethnic violence to generational poverty– needs a collaborative response. We cannot do this by ourselves. We need a shared commitment to the common good. Those are the practices of covenant living.

For all the years that the villagers of Le Chambon sheltered Jews and others who were hunted during the war, in houses and barns and attics and storage rooms, no one was ever betrayed. People knew what was going on, but no one betrayed anyone else. Neighbors, even if they were not friends, did not turn in neighbors to the authorities. The unspoken covenant was that the community would work together to protect the most vulnerable, no matter the cost.

Imagine the transformation in our world, our country, our city, if we lived together like that?

Our nation was founded on covenantal principles. Patriots supporting independence from England quoted the Bible, especially the Hebrew Scriptures, more than any other source. They understood that by virtue of God’s covenantal expectations of them there were universal values that transcended mere independence from England. The Declaration of Independence opens by citing them: equality and the right to life, liberty, and the pursuit of happiness for all.

Those are covenant values; they aim to build communities of mutuality and equity. They have yet to be implemented, but that doesn’t mean we should give up. We are, after all, followers of Jesus, who came as covenant-in-the-flesh. He calls us to push boundaries, to reconfigure systems, to dismantle injustice – in other words, to become a covenantal community.

That is the clearest measure of a covenant life: Do you love one another?

Whoever enters that church walks under that question. And when they leave, it goes with them into the world.

Do you love one another?

That question goes with us, as well.

In a moment we will baptize twin brothers Ethan and Owen. They will come to the font, brought by parents who will promise to live the Christian faith and teach it to them, and at the font they will be surrounded by a church community that will promise to guide and nurture them, with love and prayer, and to encourage them to know and follow Christ.

The words and the water of baptism symbolize the covenantal promises of God for these children, and they remind us of our own calling to bear that same promise to the world.

Good and gracious God, we thank you for your steadfast love that never ceases and your mercies that do not end. Rising this morning fresh love and new mercy were waiting for us. With our whole hearts we declare your great faithfulness. You are our hope. (Lamentations 3:22-24)

Even though you make it possible for us to keep covenant with one another and your good creation, we have turned away. We have not honored your faithfulness but instead have allowed and contributed to the conditions that destroy life.

Out of the abundance of your steadfast love, forgive us. Inspire and sustain our commitment to fearlessly examine and change our practices. Renew our courage to confront public systems and policies that deny the signs of your everlasting covenant.  Shape our imagination for covenant and prepare us for covenant relationships with:

We hope to be a sign to the world a Loving God has been this way before creating abundant life.

You promise to comfort those who are grieving.

Make your presence known to all who are hospitalized and be a discernable presence with each person in our community who is facing illness.

Please give extra portions of peace and strength to all who are caregivers; show us how we can support the caregivers among us.

And now we join our hearts together and pray as our covenant-keeping Jesus taught us, saying: