What Does the Story of Creation Mean? 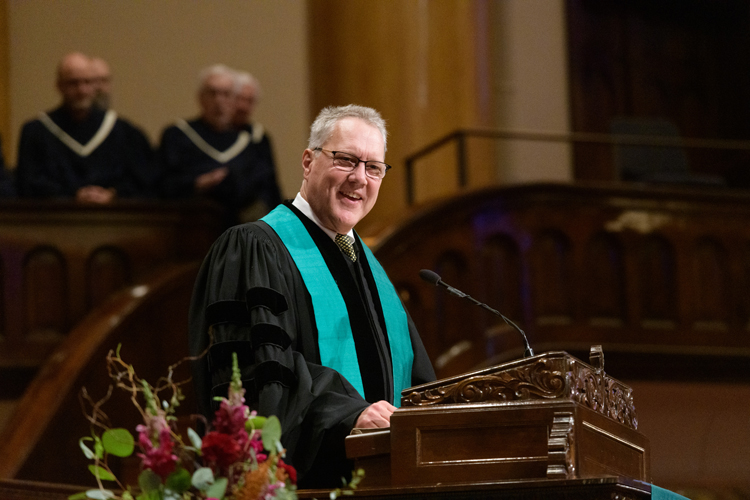 Christian faith didn’t start with Jesus. Our faith has its roots in the Hebrew stories of old. In September worship at Westminster we will explore four of those foundational stories. They are windows into an understanding of God that continues to animate our faith to this day.

We start with Creation.

In the summer of 1923, a Jesuit priest named Pierre Teilhard de Chardin set off on an expedition in the Ordos Desert of Mongolia. Since his priestly vows required him to celebrate Mass every day, in the harsh Mongolian wilderness he was soon facing a challenge. He had no wine, no bread, no sacred vessels, no altar.

He had found himself in similar straits as a stretcher bearer in World War I. On the battlefield he had to improvise the Mass. In doing so he discovered, as he wrote from the trenches, that the incarnation of Jesus Christ “is not confined to the particle of matter (the bread, the host)…(and) transubstantiation is encircled by a halo…that extends to the whole universe.”

He was giving himself permission to step outside the established Roman Catholic tradition and ritual.

Deep in the wilds of Mongolia a few years later, Teilhard de Chardin remembered that experience and decided to write a new liturgy right there in the desert. It was a creation-centered liturgy, and he called it The Mass on the World. For that priest in the wilderness, “the whole earth would become his altar, with human toil and suffering of the day… offered up as his bread and wine.” (https://northeastwisdom.org/2015/07/a-negative-space-eucharist-based-on-teilhards-mass-on-the-world/)

He hadn’t set out to do so, but in his Mass on the World Teilhard de Chardin reinterpreted the story of Creation and acknowledged that the earth itself bore the sacred light of God’s love.

That was important work, and we need to take it up again today.

The opening lines of scripture are essential to our understanding of the relationship of humankind to the earth and to God the Creator. Given the profound ecological crisis of our time, it’s all the more urgent for us to rediscover in the ancient narrative the secrets that lie within it, as did the Jesuit priest in the desert.

The stories of Genesis are often misconstrued by both believer and non-believer. The ancient texts do not aspire to be read as evolutionary science and should not be read as such. They’re not a textbook on geology or biology or paleontology. Nor are they meant to be taken literally.

Those who dismiss the Genesis account of the beginning of the earth as a pre-scientific fiction miss the point of the texts. They are myth in the best sense of that term, which is to say: they convey deep meaning and point to purpose that extends far beyond us in time and space. And they are foundational to our faith today.

In Genesis the Hebrew people are simply trying to make sense of something beyond their capacity to grasp – something beyond our capacity to fully comprehend, as well, even with the help of science. Teilhard de Chardin held a doctorate in geology and taught physics and paleontology. He made major discoveries about evolution. He contributed to the scientific record. Yet he was also a mystic. He understood science in a deeper way, as a window into the mysteries of the cosmos.

The earth is 4.5 billion years old, give or take 50 million years. Absorbing such a vast span of time and all the processes we know were at work within it requires imagination, whether you’re a Hebrew storyteller 3000 years ago or a 21st century scientist.

“If the billions of years of life on earth were scaled to a 24-hour day,” one scholar says,

“Our settled civilization began about a fifth of a second ago. That short burst covers the taming of fire, the development of language, the rise of agriculture”

– and, I  might add, the Industrial Revolution, nuclear energy, and the Internet. (Bill McKibben, Falter [New York: Holt, 2019], p. 13) Genesis should not be viewed as getting science wrong, but, rather as an attempt to discern what it means that Creation even happened in the first place.

So – what does the story of Creation mean? The answer may lie in the principles it proposes. There are at least three:

An embedded rhythm of goodness leaps out as we read the Bible’s first pages. As each day of Creation concludes, we hear the phrase And God saw that it was good, over and over again, until it culminates on the sixth day: God saw everything that God had made, and indeed, it was very good.

“Goodness does not come through essence but essence comes through goodness…Goodness conducts…things out of non-existence in order that they may be.” (Quoted by John Philip Newell The Book of Creation [New York: Paulist Press, 1999], p. 37)

God creates for the sheer goodness of Creation.

Unfortunately, many in the Church long ago decided that the key point in the Creation account was not the pure splendor and wonder and majesty of it all, but, rather, the introduction of sin. They watched the serpent encourage the earthlings to eat of the Tree of the Knowledge of Good and Evil and then locked onto that piece of the narrative as if that were the most important thing in the account. They labeled it The Fall, and Original Sin became the Church’s dominant memory of the Creation, forgetting that the story is suffused with Original Goodness.

A theological split in American Christianity reveals itself in competing interpretations of Genesis. Some try to force a factual meaning on the texts, and focus on sinfulness as primary. Others approach the text in a different way, looking for deeper meaning, and focus on the goodness of Creation.

I’m in the latter group. And God saw that it was good.

Goodness extends to our time, as well. Last week we drove to Winnipeg, Manitoba, on back roads. As we made our way north the world began to smell more and more of fall. We watched the color slowly come, first on the sumac, then the cattails, the grasses, and then the maples. With geese honking overhead the season was upon us. And it was good.

We all know what the Genesis storytellers meant. When we drive across miles of prairie covered in grasses and marshlands and winding rivers, fowl in the air, deer along the road, we know it is good. When we dip our paddle and glide over the steel-flat surface of a northern lake, we know it is good. That’s the takeaway from the biblical story of creation, and it’s as real in our time as it was 4.5 billion years ago.

Yet, today rainforests burn, heat scorches the earth, oceans and wind churn – and the result is devastation of life and property like that in the Bahamas. We are violating the goodness principle of creation, and as people of faith that should deeply concern us.

Next, the fruitfulness principle.

Those words echo the very first commandment given to all Creation – both animals and humankind – was to fill the earth with life, to “be fruitful and multiply.” Having created the creatures, The Creator now longs for them to revel in the earth and live to their full purpose, as intended.

God did not and does not operate from a posture of scarcity. Life was to be abundant and rich and varied. In the Genesis account we can almost hear the joy of God hanging on whether or not the Creation would thrive and fill the earth with good things.

Surely the Creator feels little joy in what we have done. A recent UN study warns that 1 million species are at risk of extinction. (https://www.nationalgeographic.com/environment/2019/05/ipbes-un-biodiversity-report-warns-one-million-species-at-risk/) Today “there are half as many wild animals on the planet as there were in 1970.” (Falter, p. 12)

This is not part of a natural cycle as other extinctions have been. This is our doing. We are violating the fruitfulness principle, and as people of faith, we should be deeply concerned about that.

In the Creation story, God sets the earthling in a garden to “till” it and “keep” it, as most English translations say. The Hebrew language offers more nuance to those verbs.

The word translated as “to till” comes from the root, to serve. We are put in the garden not merely to till it, but to serve the garden.

And the Hebrew word usually rendered as “to keep” comes from the root meaning to watch over, look after, sustain. It’s what stewards do on behalf of someone else. The human role in the Creation story is not subduing, dominating or exploiting – as it would appear today – but, rather, serving and sustaining the garden, the earth, the planet.

“The Lord God took the earthling,” Genesis says, “And put them in the garden to serve it and sustain it.” (Genesis 2:15)

The truly damaging part of the story of Creation as it continues to unfold is not the eating of the forbidden fruit but, rather, the abandonment of our assignment on earth. The creatures and the human family, the water, air, and land, are all suffering for that sin. As people of faith, that should deeply concern us.

We have forgotten that Creation reflects the glory of God. That idea is foundational to our faith. The earth and everything in it bear the image and light of God. The divine imprints itself in all things on this planet.

“O Lord my God, you are very great.

You are clothed with honor and majesty,

wrapped in light as with a garment.

you set the beams of your chambers on the waters,

you make the clouds your chariot,

you ride on the wings of the wind,

you make the winds your messengers,

Those of us who worship the One we call Creator discover in the old Hebrew story, in Genesis, that all of life is sacred.

Teilhard de Chardin describes the Mass he wrote in the desert like this:

“The world is the final, and the real, Host into which Christ gradually descends…Nothing is at work in creation except in order to assist…in the consecration of the universe.” (https://teilhard.com/2013/07/17/life-of-teilhard-de-chardin-first-china-trip-and-mass-on-the-world-1923-1924/; my italics)

The consecration of the universe.

Now is the time for us as people of faith to remember that the earth is holy, and must be treated as such.

All our work to save the planet springs from that foundational conviction.